In a previous case study, you saw that a Keyword Only Description ranks higher in YouTube...

For that experiment, the keyword was used only once in the description, for all 4 test versions...

Today, I'll show you what happens when you include the keyword multiple times in the description...

(Note: This case study builds directly off of that YouTube Description Case Study, so you'll want to read it first, if you haven't already.)

For this test, we’ll keep using the same 3 fake words:

After uploading the new videos, we'll see if they rank higher than the ones from the previous test.

For this test, I created 9 fake descriptions. (3 tests x 3 variations)

To run a scientific test, you need to isolate one factor as much as possible, to get accurate results.

YouTube isn't able to determine any context around this fake description, so it doesn't influence the rankings, and we can see how the fake keywords actually affect the results.

For each keyword, I’ll be testing these variations:

Variation 1: Keyword at the Beginning and Middle

In this variation, the keyword is used two times in the description.

Variation 2: Keyword at the Beginning, Middle, and End

For this variation, the keyword will be used three times in the description.


Variation 3: Keyword at the Beginning, Middle, End, and 7 Random Locations

In this variation, the keyword will be used a ten times in the description.

Here's a partial example of how this variation looked...

In this variation, the keyword was spread evenly throughout the description.

Once all the videos and descriptions were created, I uploaded the videos to YouTube.

Then I waited a little bit, just to make sure all 9 videos were indexed.

And here were the results...

For the fake word "Bviproseft", the Keyword at the Beginning, Middle, End, and 7 Random Locations ranked #1.

The most surprising thing was that all three videos ranked above the Keyword Only version, which was the #1 ranked version from the previous case study.

Let’s see what happened in the second test...

For the keyword "Avizrokeft", the Keyword at the Beginning, Middle, End, and 7 Random Locations also ranked #1.

So, this test had the same ranking pattern as the first test.

Let’s see if this is true for the third test...

For the keyword "Qzriboseft", the results were also identical to the previous tests.

That really surprised me...

How To Create Video Descriptions That Rank High In YouTube

All three tests had the same result, and all three versions of the description that contained the keyword more than once, outranked the keyword only version.

That tells us that putting the keyword in the Front, Middle, End, and 7 Random Locations is a high ranking description format.

The second highest ranking version was putting the keyword at the Beginning and Middle.

After thinking about the results, I had one concern...

In previous experiments, video recency was a ranking factor.

Since this experiment was run on top of the previous one, I wondered if video recency could be a ranking factor causing some noise in the results.

In other words, "Did I just give three fast horses a head start over another fast horse?"

Are these three videos ranking higher, because they have a strong description and were uploaded more recently?

If video recency wasn't a factor, would I have gotten the same results?

I won’t really know for sure, unless I run an entirely new test, where the videos are uploaded at the same time.

So, I created a new "race" where the two best horses from this test compete against the best horse from the previous one.

Recently, I ran more tests and put the results in this new book, Decoding YouTube: 6 Scientific Experiments That Reveal How YouTube Really Works In 2021.

You'll see detailed scientific experiments that reveal how to get your videos to rank higher so you can get more clicks and sales. 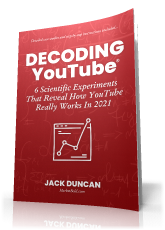