You already know that the title of a Youtube video is a ranking factor...

But is the placement of the keyword in the title tag important?

Do you rank higher if you put the keyword at the front, middle, or end of the title?

Is it possible to optimize YouTube titles just by changing where you put the keyword in the title?

Back in 2016, we ran some tests and discovered that YouTube always gave higher rankings to exact match titles.

But I saw something recently that indicated that the YouTube algorithm might have changed, and that putting the keyword at the end of a longer title ranked higher.

So, I decided to run a scientific test to find out...

Now, as I explained in the previous case study, "Do YouTube Tags Matter", YouTube always tries to return some search results.

But, when YouTube has no idea what your keyword is about, they reluctantly serve up the "No Results Found" screen.

As you can see, YouTube has no idea what these words mean.

That's important, because YouTube has no underlying context that will affect their search results.

And, it means that we won't be competing against any existing YouTube videos.

We're going to use these three fake words to run three different tests.

And, if all three tests have the same result, then we'll consider our hypothesis confirmed.

Now, to keep this scientific, the title tag needs to be the only factor that changes.

So, I also created some fake descriptions.

To make sure that YouTube doesn't try to add context using artificial intelligence, the videos are just random scribbling in Microsoft Paint with typing sounds in the background.

All the videos are the same length and style, but they've been randomized in a way that they look and sound completely different.

For each test, I put the keyword either at the front, middle, or end of the YouTube title tag.

After all 9 videos were uploaded (3 tests with 3 videos each), I waited for them to be indexed in YouTube.

Then, I searched for "Jispfresten".

Take a look at this first test result...

Honestly, I was a bit surprised.

So, my hypothesis was already falling apart at this point.

Here was the second test result...

That's not what I expected either.

The results of the first two tests don't match.

No two tests were exactly alike.

At this point, my hypothesis was proven wrong.

Putting the keyword at the end of the title tag was not the highest ranking version for all three tests.

So, after seeing these results, I decided to test the exact match keyword again.

As I mentioned earlier, while we were creating VidSpyPro in 2016, we discovered that putting the exact keyword as the title resulted in the highest rankings.

To test this hypothesis again, I created three new videos, and put the exact match keyword as the title for each of them.

Once these were indexed, I checked the results.

As you can see, for all three tests, putting the exact match keyword as the title of the video ranked #1.

I went ahead and waited 20 more days to see if these results would change over time.

But the results were still the same...

Based on these scientific test results, putting the exact match keyword as the title of your video still allows it to rank higher in the YouTube alogorithm in 2021.

And that's a very easy optimization you can use to rank higher in the YouTube search results and get more views, likes, and clicks from every video you upload. 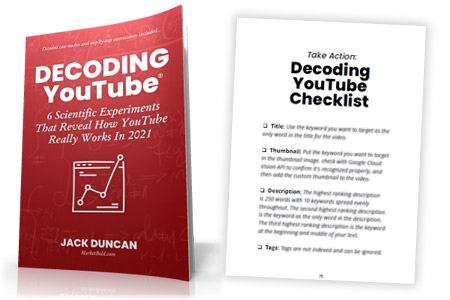 This checklist reveals the results of 6 scientific experiments and will show you exactly how the YouTube algorithm works in 2021.

Use this guide every time you upload a video to rank higher and get more views and clicks.

Enter your email address below...